1,700+ barbers and stylists around the country engaged their clients around voting in the 2020 election.

Shape Up The Vote's initial objective was to organize local businesses to engage in conversations with their clientele about voting in the 2020 election. The focus narrowed to specifically serve barber shops and salons because barbers and stylists are naturally positioned as organizers: they have trusted relationships with their clientele, they are entrepreneurs, they are local leaders in their communities, and they have a captive in-person audience. Shape Up the Vote is non-partisan and fiscally sponsored by the Social Good Fund, a 501(c)3 organization.

Barbers/stylists participated in the program in three phases:

Barbers/stylists were provided with a SUTV ‘kit’ consisting of promotional items, voting forms, and literature. Literature included information on how to vote and voting rights, but did not reference specific candidates, parties or issues. Each kit included: 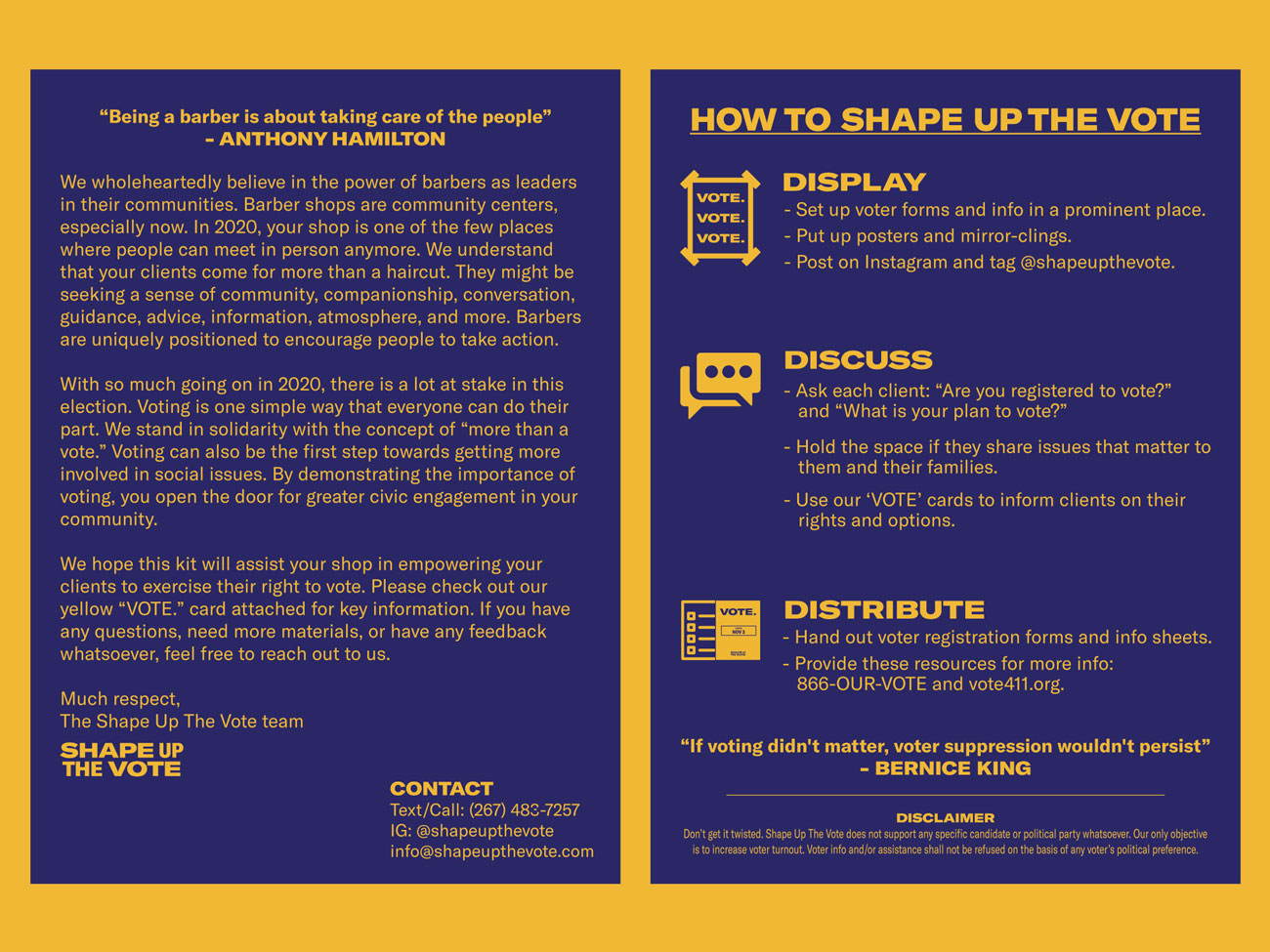 Participating barbers/stylists received a welcome letter with their kit. 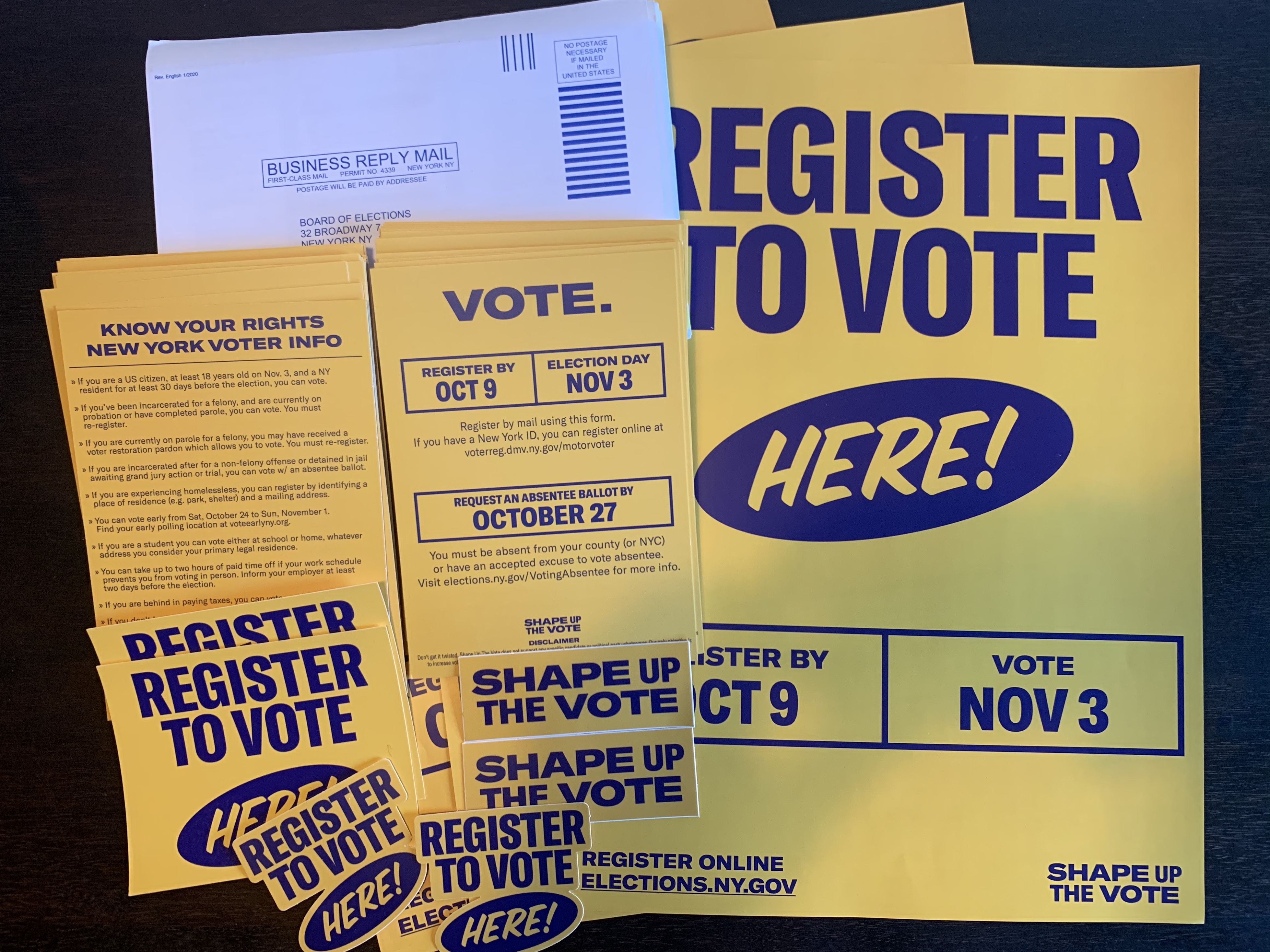 Shape Up The Vote Kit 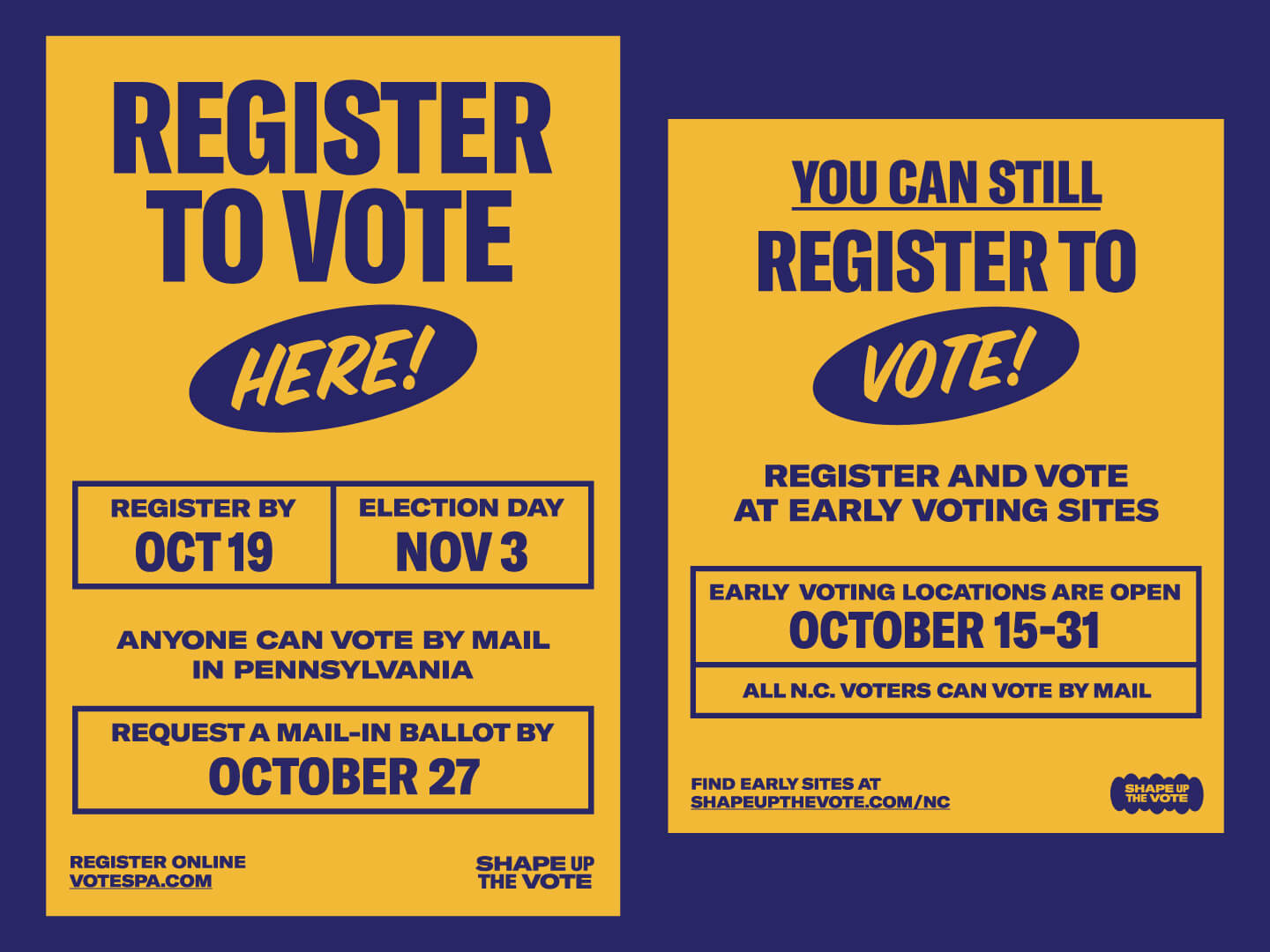 Example of posters provided in PA and MI. Each participant received posters with state-specific voting info. 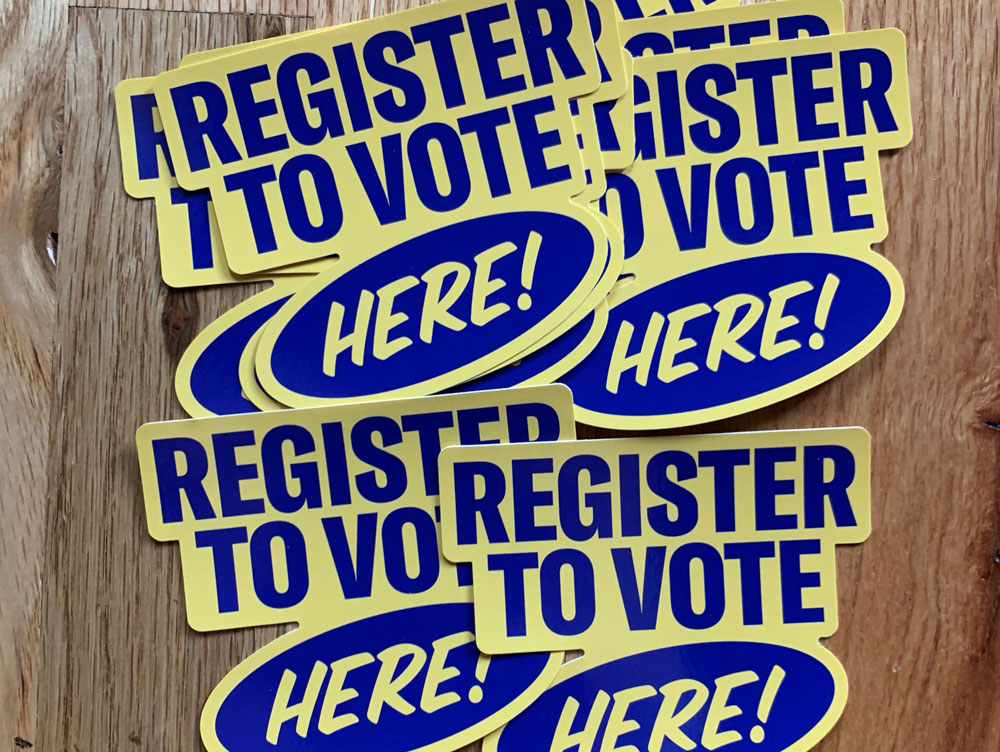 The welcome letter shared the objectives of the campaign and asked participants to promote voting using the physical space of their shop and discuss voting in conversations with clients. Specifically, barbers/stylists were asked to do the "3 D"s:

Discuss: Ask clients ‘are you registered to vote?’ and ‘do you have a plan to vote?’.

1,700 barbershops and salons participated in Shape Up The Vote during the 2020 general election, with a focus on those in metropolitan areas in target states (see state-by-state breakdown). With the exception of Florida and Texas, every participating shop received a full SUTV kit.

We measured Shape Up The Vote’s impact by estimating the extent to which participants performed three key actions.

» Displayed Materials in Shop: Displaying the posters and offering voter information handouts in shops/salons gave clients access to key information on election deadlines and how to vote, while also contributing to a social norm around voting.

» Engaged Clients in Conversation: Barbers/stylists who created a dialogue around voting in their shop participated in a powerful form of relational organizing.

» Mobilized their Community: Barbers/stylists who organized or participated in voter engagement events outside the flow of their day-to-day business.

Instead of using a hosted online voter registration form, the campaign opted to use paper forms (reflecting the informal nature of barbershops) and directed people to state-hosted registration websites. This limited the ability to accurately track registrations and engagement. Via follow-up conversations with participants throughout the campaign and through a post-election survey, the following estimates were calculated:

Shape Up The Vote was most active in Philadelphia, where our Campaign Director was based and developed a ground operation that connected with over 100 shops and developed in-person relationships with both barbers and local organizations. In October, we launched multiple initiatives:

1) Poll worker recruitment in participation with The Voter Project.

3) In-person registration and turnout events at barbershops in partnership with Better Civics, HeadCount, and When We All Vote.

During the Jan 2021 Senate runoffs, we collaborated with When We All Vote to mail voter registration kits to over 5,000 barbers/stylists in Georgia. Barbers/stylists received kits containing information specifically targeted to the runoffs, including a letter from Michelle Obama. In addition, When We All Vote organized three phone-banking efforts to follow-up with shops and ensure they were engaged with the program.

Due to time and resource constraints, SUTV deployed a digital-only campaign in Florida and Texas, texting barbers and stylists to ask their clients whether they have registered to vote and how they are voting. No physical materials were provided, but participants were given digital graphics and voter info via a state-specific url. 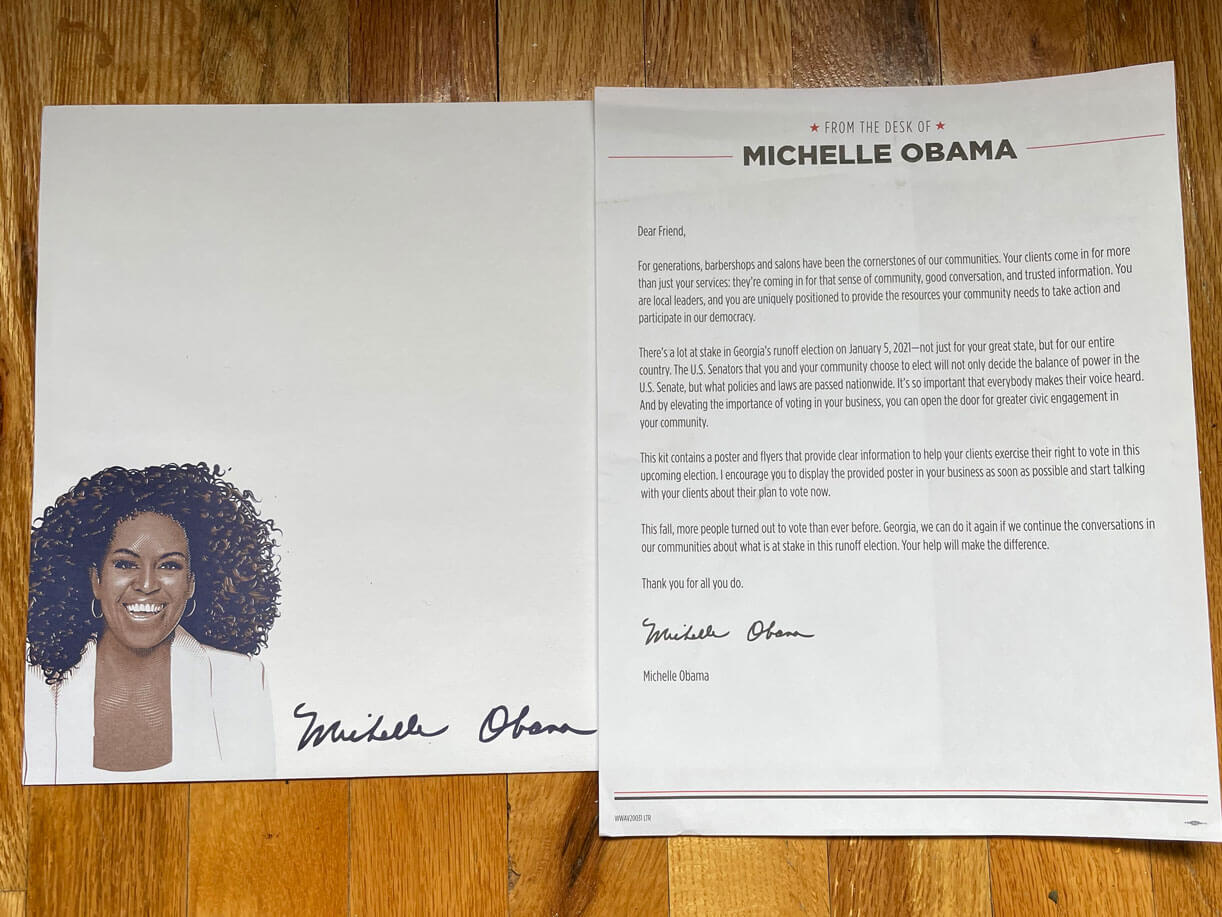 When We All Vote/Michelle Obama Note

Barbers/stylists received a kit with a letter from Michelle Obama for the Senate Runoff campaign with When We All Vote. 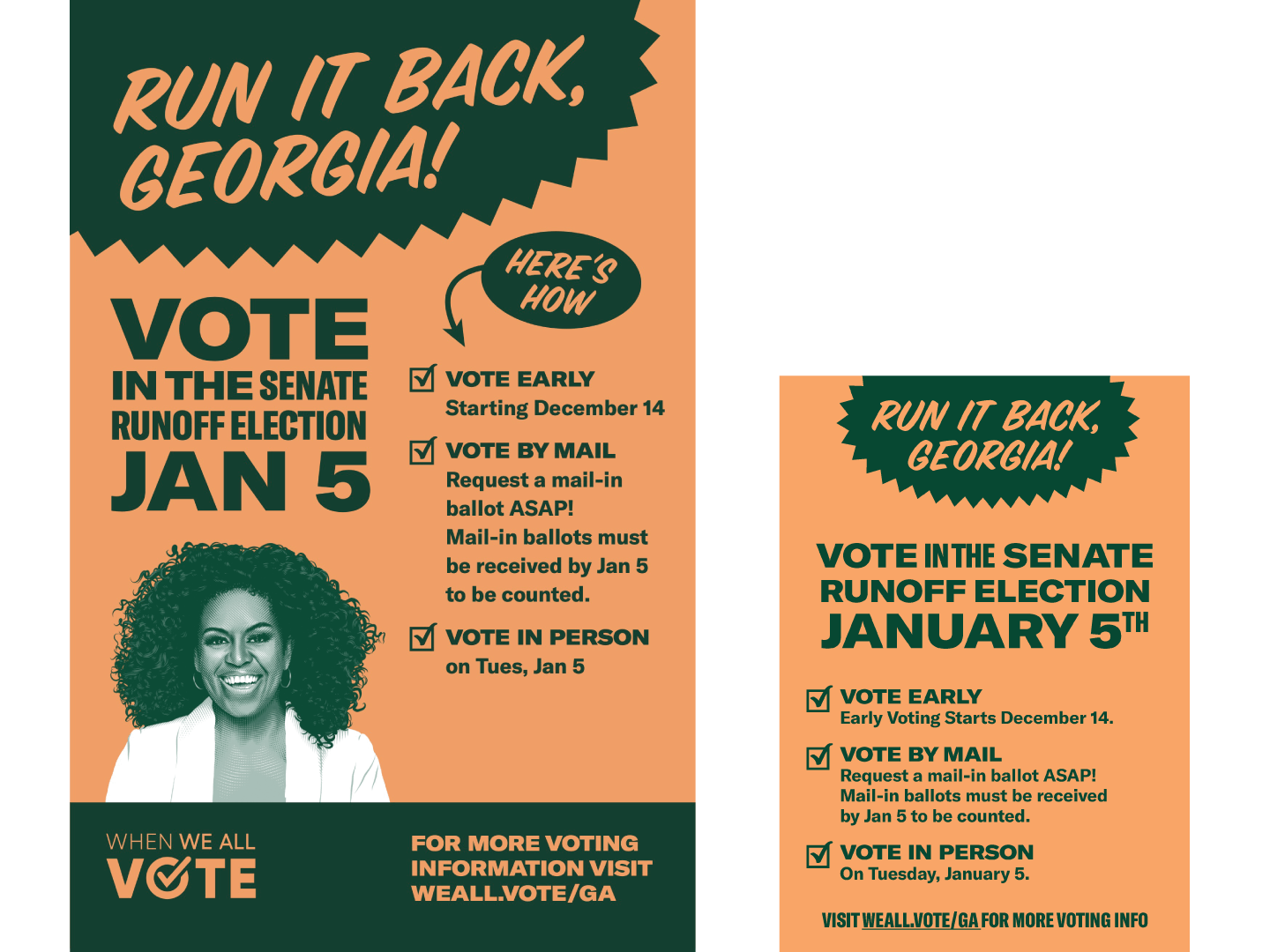 When We All Vote x SUTV Partnership

When We All Vote mailed kits with these posters and voter info handouts to 5,000+ barbers and salons in Georgia. 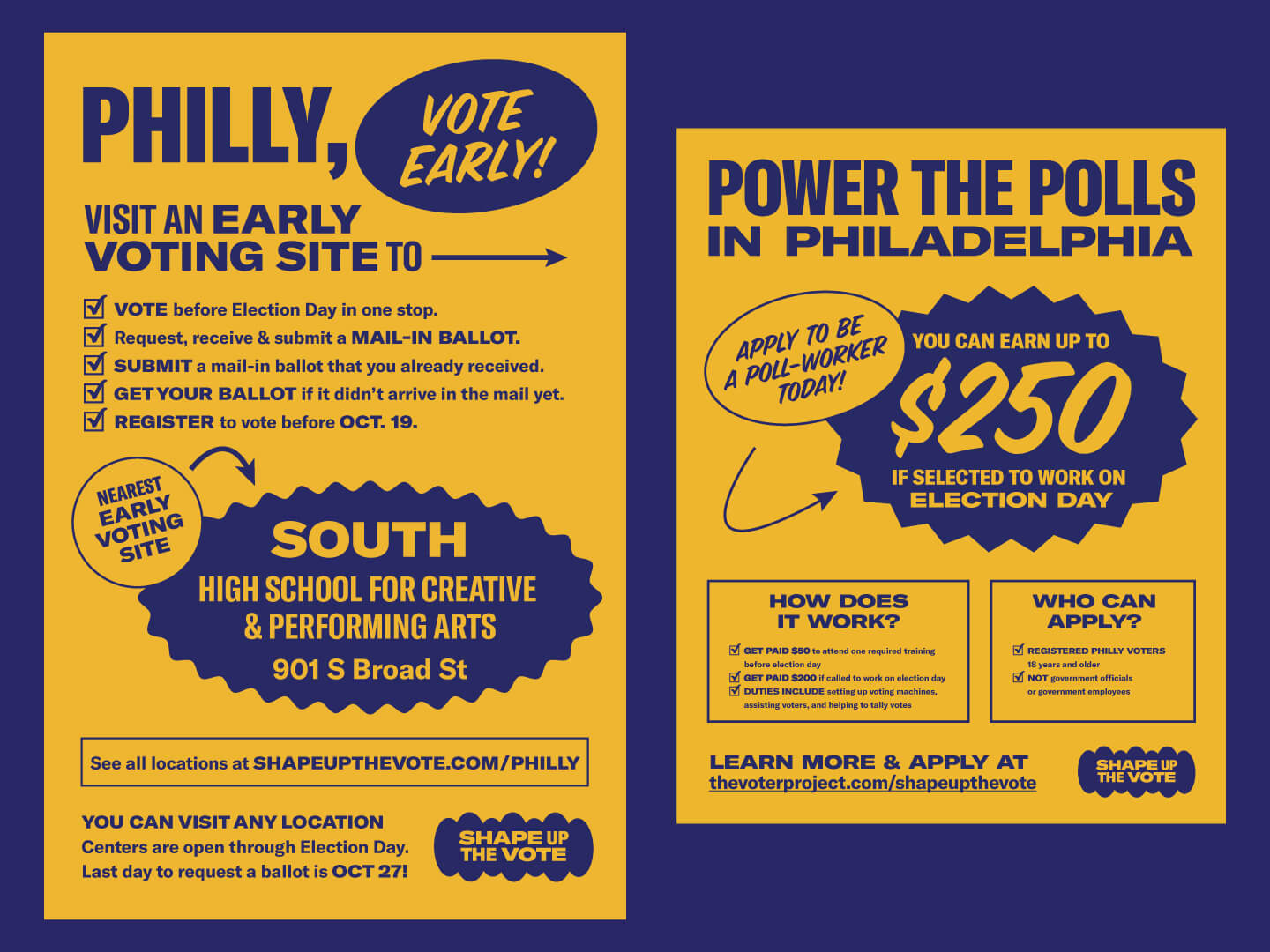 SUTV partnered with The Voter Project to help recruit pollworkers with the help of six barbers. Using a grant from Focus 2020 Philly, SUTV lauched a campaign to promote early voting centers across the city. 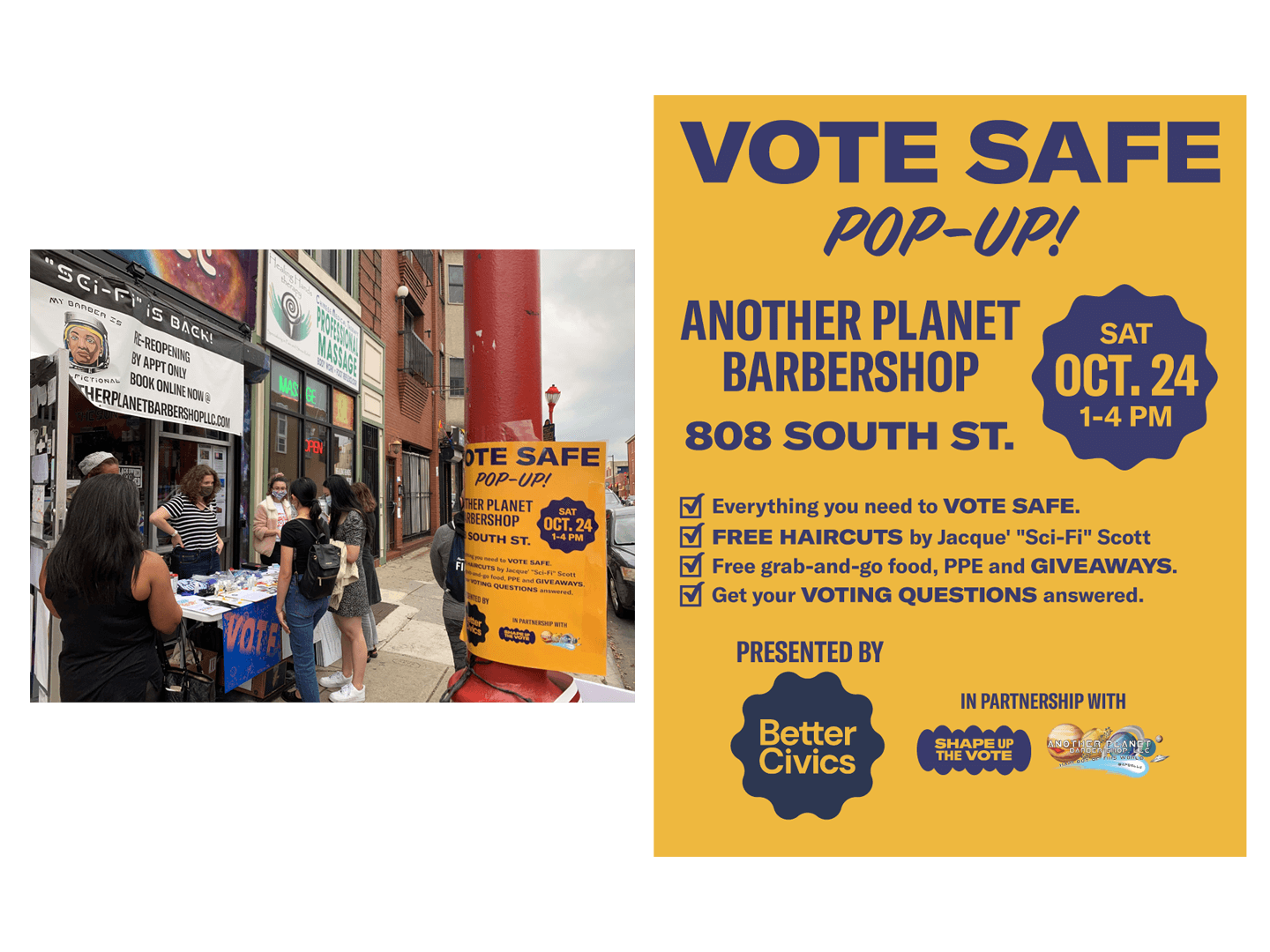 With Better Civics, Shape Up The Vote co-hosted a 'vote safe' pop-up event at Another Planet Barbershop in Philadelphia. 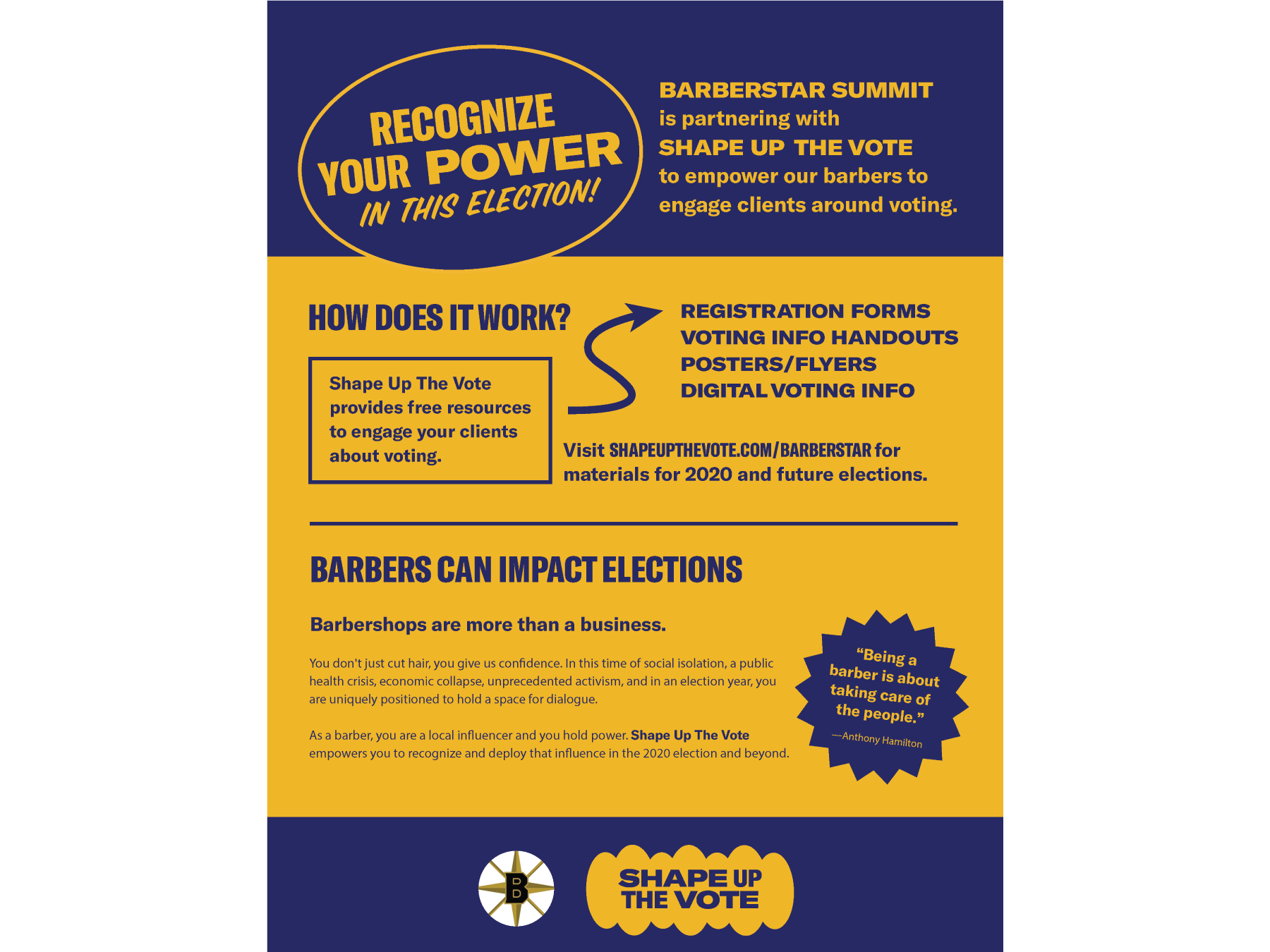 Marcus Harvey, a celebrity barber, partnered with SUTV to encourage attendees at the Barberstar Summit to turn out the vote. 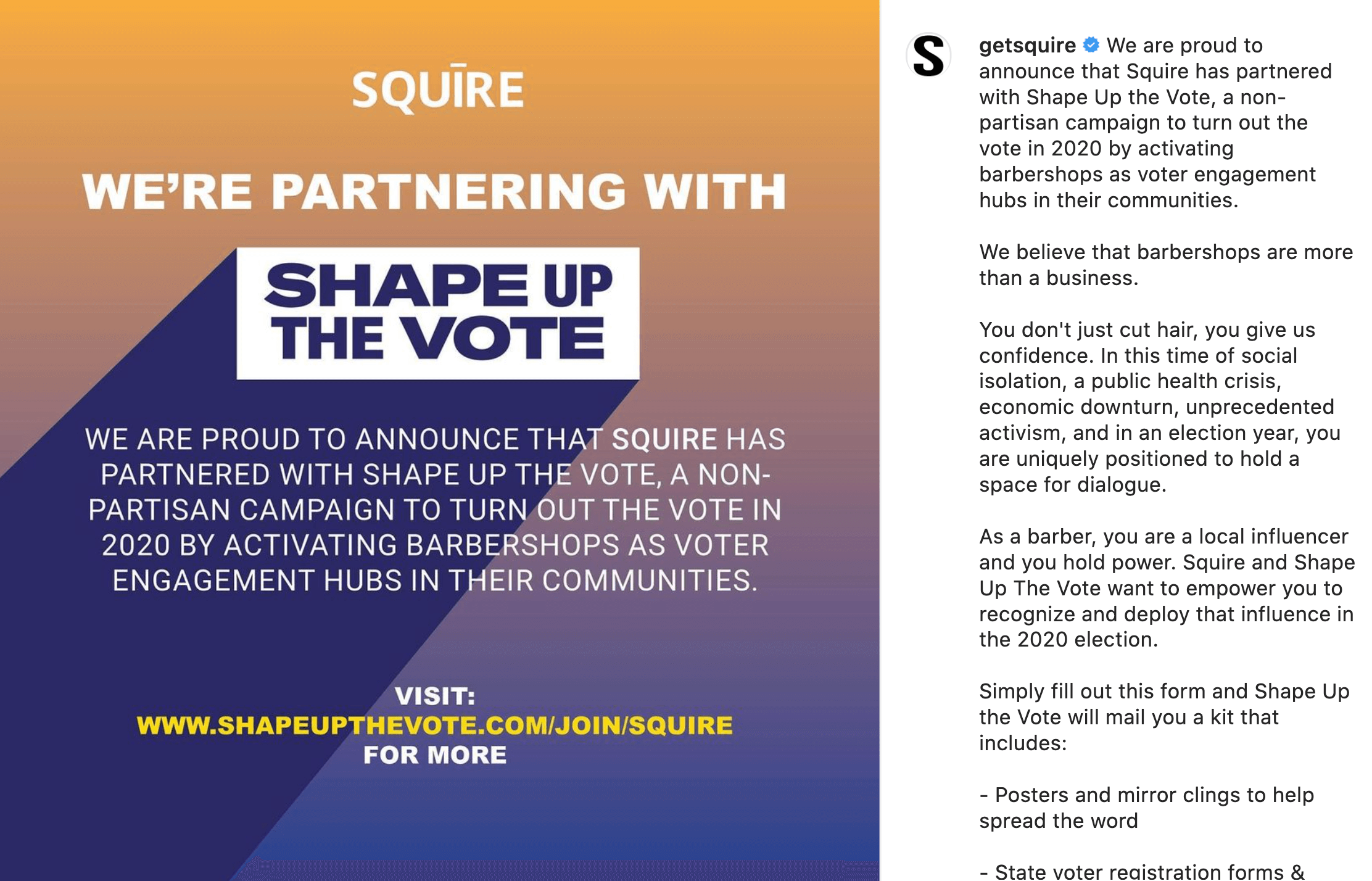 Squire, a barber management software company, partnered with Shape Up The Vote to offer kits to their users. 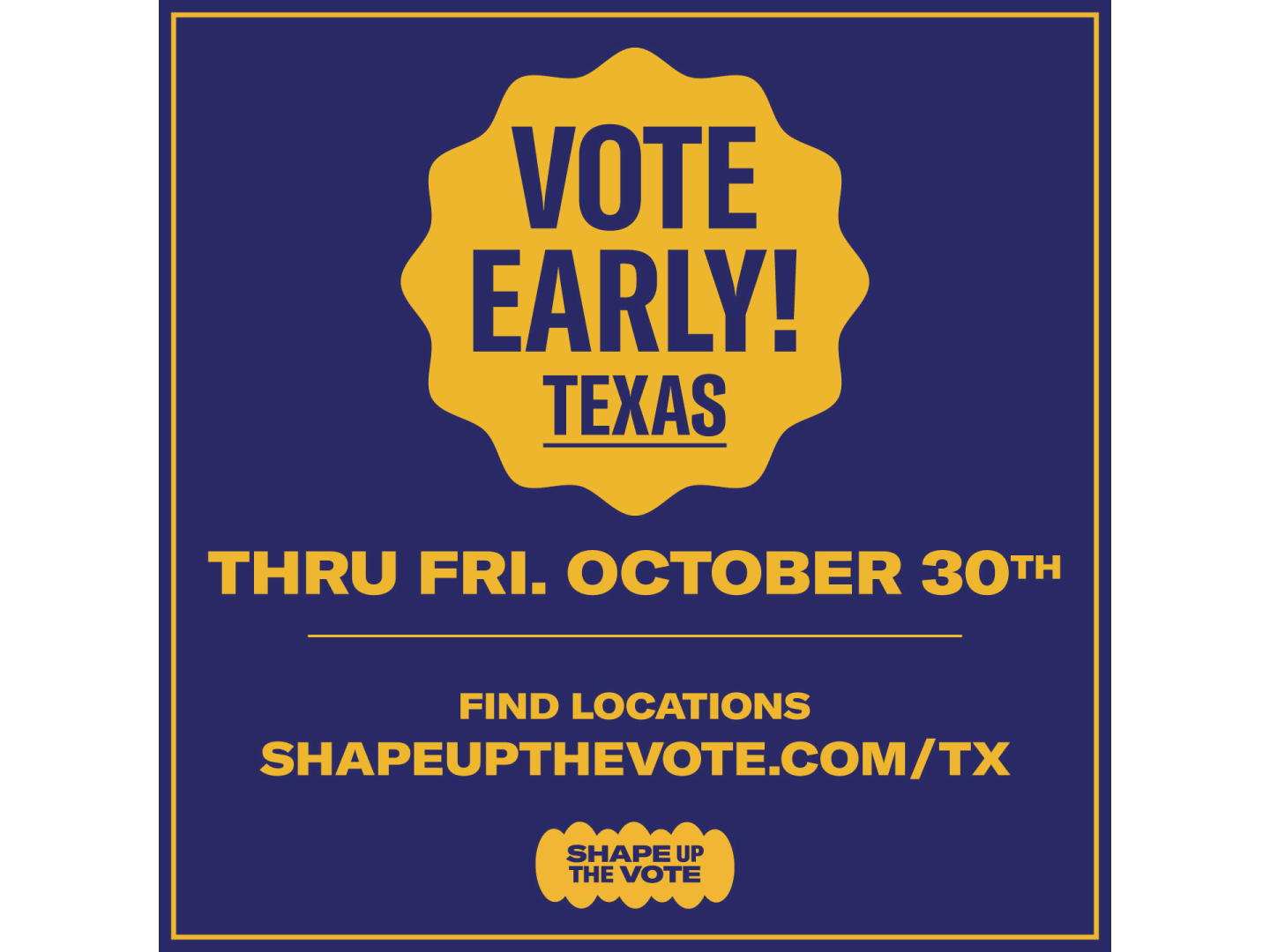 In Texas and Florida, SUTV provided digital-only assets to encourage barbers/stylists to get their clients out to vote.

Hey this is Andy from Shape Up the Vote, how are the conversations with your clients doing? It's important that as mnay poeople as possible vote early in Texas to prevent long lines on election day. People can find early vote locations at shapeupthevote.com/tx. Can you make sure ALL your clients have a plan for when and **where** they're going to vote?
I'm driving some of my customers to the building this week so they can early vote

SMS response from a participant in Texas

The follow-up once they do get your vote is how you really have your voice heard. Voting is one step, but to have people maintain the accountability is something that needs to continuously go, and that’s something I’m excited to be a part of.

- Marcus Harvey, a celebrity barber, during an IG Live session with Stephanie Young, Executive Director of When We All Vote 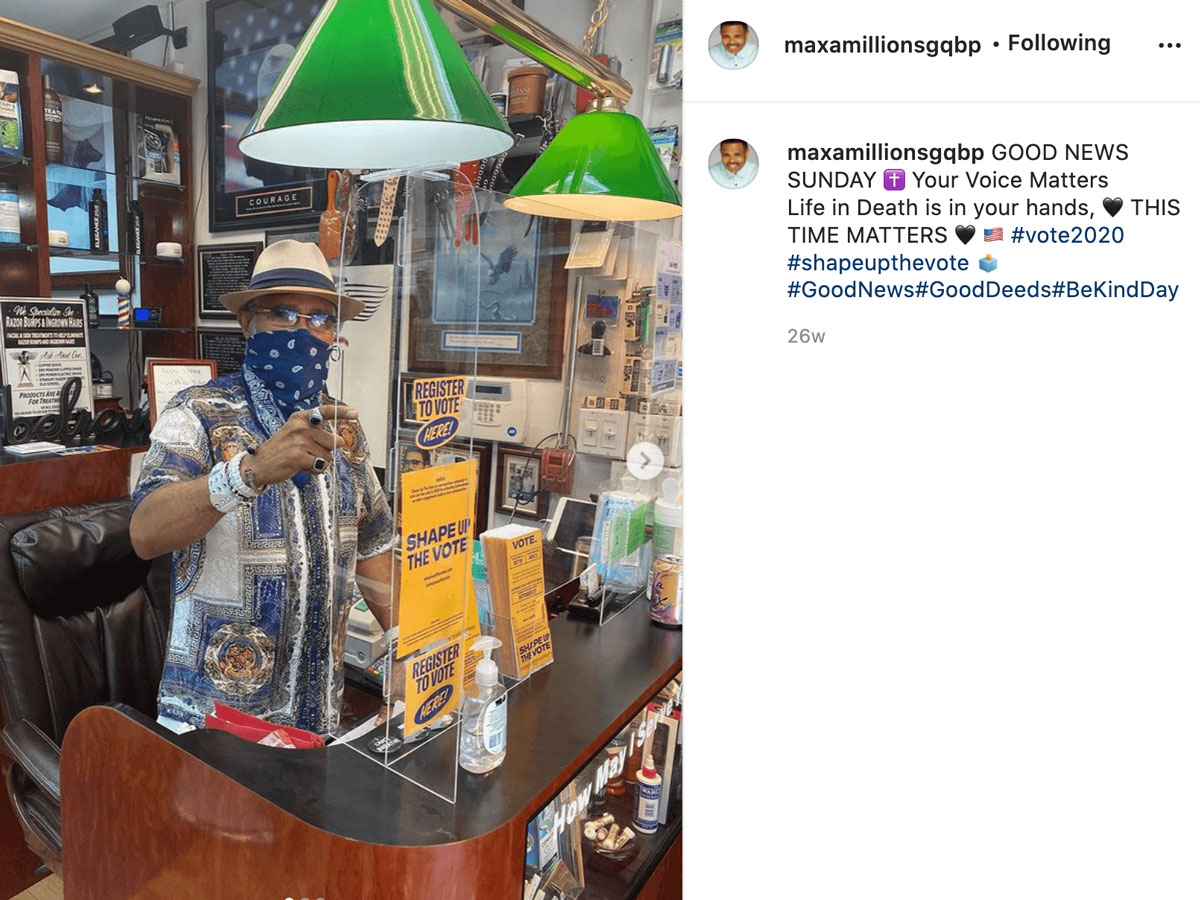 Great program. As barbers, we are able to reach people that are overlooked and /or marginalized. The trust we have with the community gives us the ability to influence and change opinions and behavior.

- Post-election survey response from a participant

A post shared by Shape Up The Vote (@shapeupthevote)

IG post from Brea J, a community-driven barber in Atlanta who previously started a program providing haircuts for kids with autism.

I think Shape Up The Vote is an AWESOME IDEA!!! I've reached out to several salons in my area to take action, and it has made a difference. I'm glad to be a voice and a tool for the movement!

- Post-election survey response from a participant

We were founded in 2020 as a three-person core team of two white men and one Indian man. Our team lacked Black, female, and barber/stylist representation. As a barber and stylist-focused campaign -- whose participants include Black and female entrepreneurs in particular -- we fell far short in creating space for diverse leadership internally, which limited the organization's ability to understand, respond to, and represent barbers’ and stylists’ needs. To move forward, we are prioritizing improving representation within the leadership team.

After the election, Shape Up the Vote polled participating barbers to understand their interest in continuing this program in future elections. 85% of respondents said they would like to stay involved in future SUTV campaigns. The top feedback was that the registration kits came too late in the cycle.

The campaign took place during the COVID-19 pandemic, a period where the barbers and stylists were severely economically impacted by government lock-downs. While participants connected with the importance of voting, some expressed that it is only part of a broader set of community activism that they have participated in and seek to engage with in the future.

Shape Up The Vote's key initiatives moving forward are:

» Recruit leadership that is representative of the barber/stylist community and the Black community.

» Execute campaigns during the 2021 municipal elections and the 2022 midterms.

» Execute an advocacy campaign in support of the CROWN Act, which ensures protection against discrimination based on race-based hairstyles.

» Conduct a randomized controlled trial to measure the impact of our campaign on an election.

First and foremost, our team shares its respect and recognition to the 1,700+ barbers who got their communities out to vote and contributed to record turnout in 2020.


Shape Up The Vote extends its gratitude to the following collaborators, advisors, funders, and partners:

Please contact us via email at info@shapeupthevote.com with any inquiries.

In early October, the city of Philadelphia used a $10 million grant to open 17 satellite election offices throughout the city. While Pennsylvania does not offer "early voting", it does allow universal vote-by-mail. Satellite offices allowed voters to apply for, receive and return a mail-in ballot in one visit, effectively permitting early voting -- a large change a month before the election.

Within a week of the announcement, Shape Up the Vote designed and produced posters, voter info handouts, and digital IG graphics promoting early voting centers and distributed them to barber shops. Many shops received posters highlighting a nearby satellite election office, and were encouraged to ask clients to vote after receiving haircuts.

Shape Up The Vote also collaborated with When We All Vote to host free haircuts by celebrity barber Sci-Fi, at an early voting activation at the Liacouras Center.